Photo:  Athletes from Seaspray Surf Life Saving Club, like Bridget Brown and Tom Fleming (both on the left), will line up against competitors across Victoria when Seaspray hosts a two-day surf life saving carnival on February 1st and 2nd.

Surf life savers from across Victoria are heading to Seaspray to compete at a two-day carnival designed to test their life saving skills and their fitness.

Seaspray Surf Life Saving Club President Amanda Castle said the carnival was open to competitors in the under 14 and 15 age groups to under 17s and open.

“Seaspray is the only location east of Western Port Bay to host a carnival this season and one of seven senior carnivals of the year before state championships in March at Lorne.

“This carnival is a fantastic chance for Gippsland’s surf clubs, including Lakes Entrance, Woodside, Wonthaggi and Inverloch, to compete against the best in the state.

“The carnival at Seaspray is known for its social atmosphere and life savers from across the state enjoy coming here to compete.”

Competitors in the carnival will compete in individual and team events, including sprint swims, surf races, board relays, beach sprints, surf boat and ironman and ironwoman events.

“I want to encourage people to come down to Seaspray on Saturday 1 February from midday and Sunday 2 February from 8am to watch and support your local surf life saving club,” Mrs Castle said.

“It’s a great chance to learn more about what we do at Seaspray Surf Club and see some of the state’s best athletes compete against one another.

“People often say if you can handle the surf at Seaspray, you can handle anything. It will be interesting to see how our guests from surf clubs across the state manage the conditions here.”

A highlight of the weekend will be Seaspray Surf Life Saving Club’s annual Dash for Cash competition held after the last event on Saturday afternoon.

The eight Dash for Cash races are only open to qualified life savers. They include a swim, board and ski race for both men and women, plus a three-person Taplin relay with a swim, board and ski leg. Teams will be drawn out of a hat for the Mixed Taplin, which means competitors from Seaspray are likely to team up with athletes from other surf clubs.

“The Dash for Cash is a great event. It’s hugely popular with the competitors and also with spectators as there are always lots of thrills and spills,” Mrs Castle said.

“It’s going to be a big weekend at Seaspray. We also have a private function for our life members and 2000 Club members on Saturday afternoon from 3pm.

“The Waves Bistro and Sandbar will be open all weekend for breakfast, lunch and dinner and there’ll be live entertainment on Saturday night. On Sunday morning, the club will have a BBQ to support our Nippers.”

FIRST DAY ON THE BEACH FOR SEASPRAY’S NIPPERS

More than 80 of Seaspray Surf Life Saving Club’s Nippers turned out this morning for their first session at the beach.
The session coincided with the beginning of Seaspray’s patrol season, which runs through until Easter next year.
More than 140 children underwent swimming assessments at the Sale pool in November, many of whom were at the beach today to have their first try at the beach flags and sprints, swimming and wading in the surf, and paddling on the boards.
Seaspray Surf Life Saving Club is one of 57 surf life saving clubs across Victoria to successfully run the Nippers program.
Nippers comprises safe, fun activities on the beach for all levels of experience and ability, with a focus on safety, fun and getting involved.
As the children move through the age groups, they learn valuable water safety and life saving skills, gain confidence in the surf, and learn how to use valuable life saving equipment. 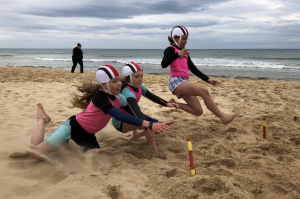 (From left to right) Ava Armstrong, Milla Lazzaro and Daisy Wilson show their speed and practise their skill in the beach flags. 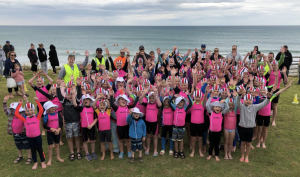 There were plenty of smiles and excitement as Seaspray’s Nippers received their caps and singlets ahead of their first session at the beach this morning. 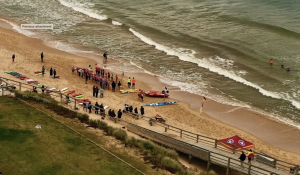 The surf conditions couldn’t have been better as Seaspray’s Nippers headed into the water for the first time this season.