It was the last local nippers carnival of the season for around 100 youngsters from Seaspray, Woodside and Lakes Entrance and their families and friends.

A strong south-easterly wind forced the water events to be moved to nearby Merrimans Creek, while the beach events proceeded as planned nearby on the sand.

Among Seaspray competitors to take age champion honours were:

Under 15 girls: Charlotte Grogan, who won the beach flags, sprint, surf swim, and the board race;

Under 14 girls: Zali Gallagher, who placed first in the beach flags, sprint and board race, second in the iron nipper and third in the swim;

Under 13 girls: Charlotte Stephenson, who came first in the board race and iron nipper, second in the swim and third in the flags;

Under 11 boys: Leo Stephenson, who won the board race and beach flags and came second in the sprint, swim and iron nipper;

Under 11 girls: Lily Canfield, who was first in the swim, board race, board rescue and iron nipper, and third in the flags and sprint;

Under 10 boys: Max McLay, who won all six of his events (flags, sprint, wade, swim, board and iron nipper);

Under 9 boys: Patrick Centra, who had wins in the flags, sprint and wade, came second in the board and swim, and third in the iron nipper; and

Under 8 boys: Jack McLay, who placed first in the flags and board, second in the sprint and third in the swim.

Lola Van Berkel was among Seaspray’s other outstanding competitors. Lola won the wade, swim, board and iron nipper events in the under 10 girls.

Seaspray Surf Life Saving Club President Amanda Castle said the carnival was a great way to begin winding up the season for the young competitors.

“The last nippers session for the current season will be held this Sunday morning, before the Seaspray club championships are held on Saturday, February 29,” Mrs Castle said.

“This whole-of-club carnival will be a chance for our young nippers to compete alongside the club’s youth, senior and masters competitors, including those who’ve won titles at a state and national level.

“It’s a great day for the club’s members to get together on the beach and enjoy a fun day of competition. I’d like to encourage people to come down to Seaspray on the 29th, enjoy a meal at the bistro and see just what our local surf life savers can do.

“It’s been a terrific season for our young nippers, including many who were taking part for the first time, and the club is proud of what they have all achieved.” 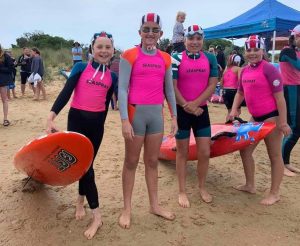 Ready to compete in the under 12 board rescue event representing Seaspray are (from left) Evie Humphris, Tara Dihood, Frances Dwyer and Lana Douthat. 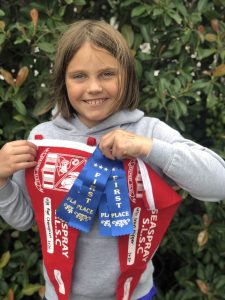 Lily Canfield was named the under 11 girls age champion after winning the surf swim, board race, board rescue and iron nipper, and coming third in the beach flags and beach sprint.

Around 100 excited and enthusiastic youngsters from Seaspray, Woodside and Lakes Entrance competed at the last local carnival for nippers at Seaspray at the weekend. 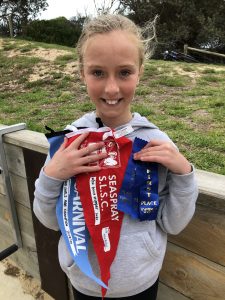 Lola Van Berkel was among Seaspray’s top performers, winning the wade, swim, board and iron nipper events in the under 10 girls.

Every competitor from Seaspray who competed at the 2020 Victorian Masters Lifesaving Championships held at Lorne on Saturday came home with a gold medal.

Around 400 competitors from across the state faced challenging conditions in the surf, which the host club said were only seen a few times a year and challenged the most experienced surf life savers.

Despite travelling nearly 400 kilometres to get to the event, the team from Seaspray was rewarded for its effort.

Seaspray’s strong performance continued the next day when Lorne hosted a senior and youth carnival.

Seaspray’s ski paddlers handled the surf better than most, before the remainder of the water events were cancelled due to the challenging conditions. 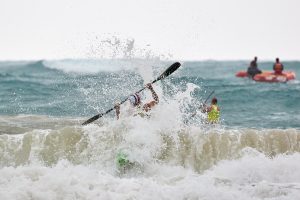 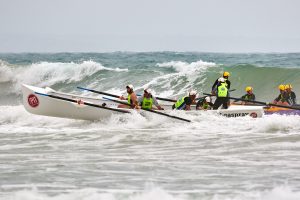 SEASPRAY’S NIPPERS COME OUT ON TOP AT LAKES ENTRANCE

A strong contingent of nippers from Seaspray Surf Life Saving Club, including plenty of first-timers, competed at the Lakes Entrance Nippers Carnival on Sunday.

The weather may have been gloomy, but Seaspray President Amanda Castle said the local team of nippers was excited and keen to compete against friends old and new from the Lakes Entrance and Woodside surf clubs.

“It was the first carnival for many of our families and nippers and I think they all enjoyed the friendly and supportive atmosphere that you find at all of our local carnivals,” Mrs Castle said.

“The club was proud of the performances of all our outstanding young competitors. We are all particularly proud of those who are with us for their first season this year and came along to their first carnival with a great attitude.”

The water events were held in the lake by the footbridge due to the rough surf conditions.

The Seaspray club, which was declared the overall winner at the carnival, will this weekend host Lakes Entrance and Woodside when it holds its nippers carnival on Sunday morning.

Mrs Castle encouraged spectators to come down to the beach to support all of the competitors.

“The carnival is a good opportunity to support the club’s youngest members, who might one day patrol our beach and keep you and your family safe,” Mrs Castle said.

“It’s also a chance for anyone who might be thinking of joining the program to see what we do at Nippers.”

The carnival will run from 9am until around lunchtime. To book a table for lunch at the Waves Bistro and Sand Bar, call 5146 4231. 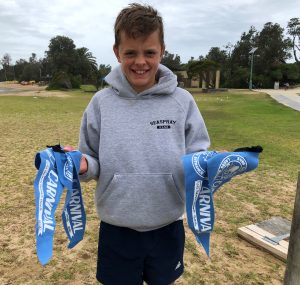 Jimmy Greenwood came first in the under 12 boys surf swim, beach sprint and board race and the under 13 boys iron nipper event. 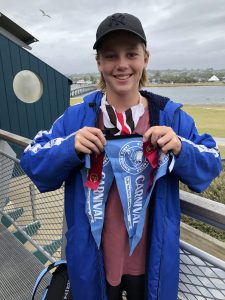 Max Castle  won the under 14 boys board race, beach sprint and iron nipper event, and came second in the surf swim and beach flags. 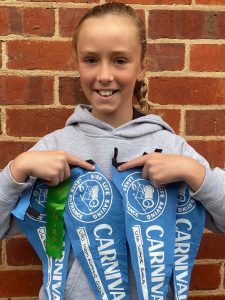 Lola Van Berkel came first in the under 10 girls board race, wade, surf swim and iron nipper, third in the beach sprint and fourth in the beach flags. 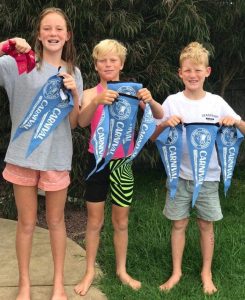 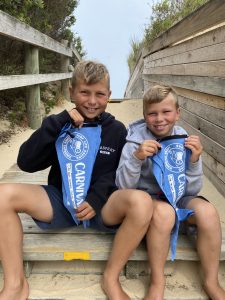 Max McLay came first in all of his events in the under 10 boys, including the iron nipper, while his younger brother Jack came first in the surf swim, board race and beach flags, second in the beach sprint and third in the wade race. 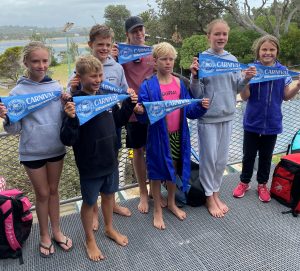 Winners representing Seaspray in the iron nipper event, which comprises a swim, board and run leg, were (from left to right) Lola Van Berkel (under 10 girls), Max McLay (under 10 boys), Jimmy Greenwood (under 13 boys), Max Castle (rear, under 14 boys), Leo Stephenson (under 11 boys), Charlotte Stephenson (under 13 girls) and Lily Canfield  (under 11 girls). 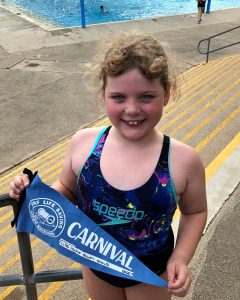 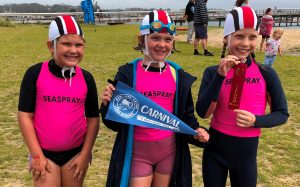 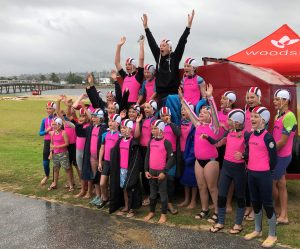 Seaspray’s team of nippers, some of whom were competing at their first carnival, were in high spirits during the Lakes Entrance Nippers Carnival on Sunday, despite the grey sky and early rain.

Competitors from Seaspray Surf Life Saving Club took home a handy collection of pennants from the state surf life saving carnival hosted by the club at the weekend.

Club president Amanda Castle said the team from Seaspray had an advantage over their rivals at the carnival, the only state level carnival to be held east of Western Port Bay this season.

“The forecast was for challenging weather on Saturday, so we decided to shift the events planned for that day to Sunday. Instead of a two-day carnival, we were able to hold all of the events on just one day,” Mrs Castle said.

“Seaspray is known for its difficult conditions, but our local competitors are experienced, know the beach well and understand how to use the conditions to their advantage.

“The Dash for Cash still went ahead on Saturday afternoon, attracting friendly competition between entrants. It was very entertaining for all the spectators who gathered to watch in front of the club house.”

“This event was the first state carnival for five of our Under 14 youth members, who’ve stepped up from Nippers last season. They all gave it their best and the club is very proud of them,” Mrs Castle said.

“I also want to thank all everyone who helped out over the weekend. Events like this can’t run without assistance from our water safety volunteers, local officials and Life Saving Victoria. We also had invaluable support from Woodside’s IRB crew, Brydie and Graeme Hurrell, who spent most of the day on the water.” 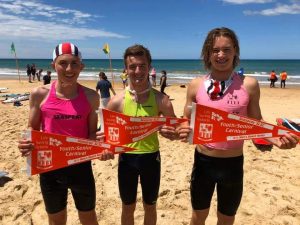 (From left to right): Zac Bloink, Owen Gallagher and Angus Hugg came first in the Under 17 Men’s Board Relay.

Ella Ronchi (left) and Amy Fleming (right) teamed up with a competitor from Inverloch to race in the Open Women’s Ski Relay. 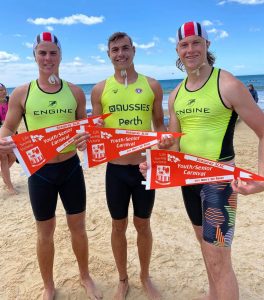 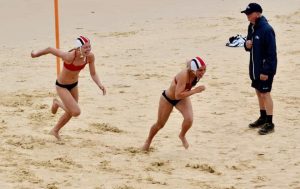 There was friendly competition between the second and first place getters, Bridget Brown and Jess Jackson, in the Open Women’s Beach Flags. 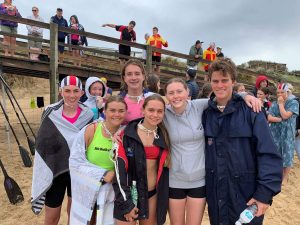 Trying to keep warm while not competing were (from left to right) Zac Bloink, Courtney McDonough (back), Amy Fleming, Angus Hugg (back), Jess Jackson, Abi Allman and James Robbins.
Uncategorized