A small group of talented local Nippers have competed at a junior surf life saving carnival at Point Leo against some of the best young competitors from across Victoria.

Despite their small numbers, the youngsters from Seaspray made their presence felt on the beach and in the water.

The junior carnival, the sixth of the season, was a lead-up event to the 2020 Junior Lifesaving Championships in Warrnambool this weekend.

The group competed against much bigger teams from surf life saving clubs including Mornington, Mentone, Mordialloc, Lorne, Torquay and Portsea.

Each one of the local Nippers performed strongly against talented nippers from across the state.  Among the results were:

Max winning the under 10 boys board race and placing fourth in the surf swim;

Remy securing third in the under nine boys wade race;

Charlotte coming sixth in her heat of the under 13 girls iron nipper event;

Leo winning through almost 20 heats of the under 11 boys flag race to reach the final;

Leo competing with Max, Leo and Jett to come fourth in the wade relay;

Jett coming second in his heat of the beach sprint;

Jimmy claiming fourth place in the final of the under 12 boys board race and sixth in his heat of the iron man; and

Jimmy teaming up with Leo to make the final of the under 12 boys board rescue.

Charlotte, Jimmy, Leo, Jett, Mack, Max and Remy will this weekend travel almost 500 kilometres or around five-and-a-half hours to compete in the 2020 Victorian Junior Lifesaving Championships.

Warrnambool Surf Life Saving Club is hosting the three-day event at Lady Bay, with the first events to begin on Saturday morning. 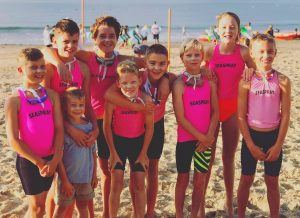